The Picture of Health

The picture is finally coming into focus.

UPDATE: Reigning CFL Most Outstanding Defensive Player Willie Jefferson did not practice during Winnipeg’s closed session on Tuesday, putting this status into some question for Week 1. Andrew Harris and Darvin Adams both remain non-participants and look questionable at best for Week 1. From what I’ve seen though camp, and in practice this week, I would speculate that Adams will be out and Harris is, at best, a game-time decision. Another note on Jefferson; while he may be the best player in the entire CFL, it’s a good thing the Blue Bombers employ a heavy personnel rotation though one of, if not, the most talented defensive fronts in the league.

We got our first look at the Blue Bombers’ and Ti-Cats’ Week 1 injury reports on Sunday ahead of the 2021 CFL season opener. Some key names find themselves among the question marks for Thursday’s Grey Cup rematch in Winnipeg, while we also learned the QB1 starters.

Andrew Harris, the long-time catalyst of Winnipeg’s offensive attack, has been dealing with a left calf injury since very early in training camp, keeping him sidelined during practice for nearly three weeks. On July 24, Day 15 of training camp, Harris appeared to suffer a setback — he had been progressively ramping up his workload with partial practice participation since his final full practice on Day 2 of camp — coming up limping while doing light running work. His frustration painted the picture, his day was done, and he hasn’t participated in practice, even partially, since. With kickoff just a few days away, huge question marks remain.

Winnipeg loves to go “multiple-multiple-multiple” in everything they do on the football field. Player and scheme versatility and “the change-up” is their bread and butter. If Andrew Harris can’t go Week 1, a tailback duo with a shared workload is the likely direction offensive coordinator Buck Pierce will go. Veteran Johnny Augustine, who was beyond impressive averaging well over six yards per carry in the two games filling-in for Harris in 2019, missed the bulk of 2021 training camp with an injury. Since getting back to full health, Augustine looks 100% and raring to go. 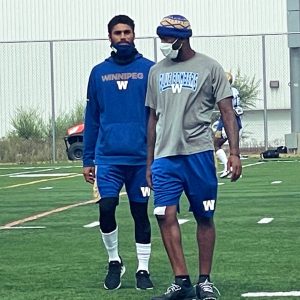 But with Harris and Augustine unable to get the ball from Zach Collaros though those dog days of July, it’s second-year running back and native Winnipegger Brady Oliveira who has been the man working near-solely with the first team offence for nearly a month now. That will give Oliveira the official Week 1 “starter” nod if Harris is down. But again, a shared backfield is to be expected, at least to some degree.

Darvin Adams suffered a shoulder injury on July 20 during 12-on-12 team drills, and hasn’t practiced since. If Winnipeg’s most veteran pass catcher is a Week 1 no-go, look to versatile receiver/returner Charles Nelson to pick up the slack. Kenny Lawler, who has some of the best hands seen around southern Manitoba in years, and Canadian Swiss Army knife Nic Demski will do a lot of the heavy lifting on offence, while Rasheed Bailey and Drew Wolitarsky will be complemented by two rookies in Kelvin McNight and 3rd-round NFL draft pick ArDarius Stewart. Stewart, a product of the heralded Alabama Crimson Tide, has been dealing with a foot issue as of late, but he had come on extremely strong in the latter parts of camp to open eyes and separate him from the rest of the rookie receiver crop.

Defensively, Winnipeg has been pretty healthy through July, outside of dimeback Mercy Maston who suffered a season-ending torn Achilles’ tendon a couple weeks ago. While the team acquired veteran defensive back Alden Darby via trade from Toronto to shore things up after losing Maston, two rookies have emerged and appear, at least early here, to be starters for Week 1.

Opposite the returning corner-halfback duo of Mike Jones and Nick Taylor — who were both very strong in Winnipeg’s 2019 Grey Cup run — we see halfback Deatrick Nichols, who led the XFL with three picks in the league’s shortened 2020 season, and cornerback DeAundre Alford who remained steadfast and consistent to elevate himself among a very crowded field of two dozen-plus DBs in training camp.

Veteran linebacker Kyrie Wilson is nagged with a thigh injury and hasn’t been able to participate in practice as of late. But Winnipeg has been extremely impressed with rookie linebacker Jontrell Rocquemore, who can play both weakside and middle linebacker, and will step in if Wilson is still snagged for Week 1.

The Ti-Cats are spoiled at pivot. Hamilton head coach Orlando Steinhauer named Jeremiah Masoli his starter after this summer saw an old-fashioned quarterback camp competition in the Hammer. Dane Evans led the Tabbies all the way to the big game two Novembers ago, but the emerging 27-year-old lost out to the seven-year CFL vet Masoli. Tough problem to have [insert emphatic eyeroll].

2017 Grey Cup hero — and game MVP — DeVier Posey is out for Week 1 with a calf injury and remains in a boot cast. Other key Ti-Cats with Week 1 availability questions include receiver Bralon Addison (knee) and DB Tunde Andeleke (hamstring), while those limited in participation on Day 1 of Hamilton’s practice week include all-star trenchmen in offensive tackle Chris Van Zeyl (thumb) and defensive tackle Ted Laurent (knee), as well as tailback Don Jackson (hip).

It all gets going Thursday night. Be sure to tune-in to Bonfire Sports’ pregame coverage — GameDay — on Thursday with Chris Walby and special guest Adam Bighill.