Some key contributors for the Blue Bombers have been officially ruled out for Thursday’s season opener at IG Field. Same goes for the Hamilton Ti-Cats, who are missing All-Star level talent on both sides of the ball.

CFL rushing champ and Grey Cup MOP Andrew Harris, who has been dealing with a nagging calf injury since the third day of training camp, will not play Week 1, nor will veteran No. 1 receiver Darvin Adams who suffered a shoulder injury on July 20. Both have been placed own the 1-Game Injured List.

Andrew Harris [33] has not practiced fully with the Blue Bombers since July 12.

Expect a shared workload in the backfield featuring Canadian rushers Brady Oliveira and Johnny Augustine. Oliveira is the north-south running power back, while Augustine is adept in the passing game and receiving out of the backfield. Sprinkle in some Nic Demski, a receiver who is known to take between-the-tackles carries like a traditional running back, and you have three capable options in Harris’ absence.

Charles Nelson, a returning Blue Bombers receiver and returner whose 2019 was cut short by injury, enters the starting receiving group, while fellow kick returner Janarion Grant could get some looks at the business end of Zach Collaros tosses as well.

Starting weakside linebacker Kyrie Wilson has an injured thigh and also finds himself on the 1-Game Injured List, leaving rookie Jontrell Rocquemore to start alongside Adam Bighill. Rocquemore has impressed through camp, and looks to have the makings of a serious pro linebacker — while, of course, real-live game action remains the true and only coveted test.

Veteran defensive back Alden Darby was among the CFL league leaders in 2019 with five interceptions. Acquired via trade from the Toronto Argonauts following the season-ending Achilles’ injury to Winnipeg dimeback Mercy Maston, the ball-hawking Darby will also start the season on the 1-Game. Darby has been lining up with the second-team defence during practice the past week, and clearly needs to get into better shape before entering the Blue Bombers starting lineup.

The list of those ruled out for Hamilton is a collection of some of the most talented players on their roster. Let’s start in the trenches where 2019 CFL Most Outstanding Offensive Lineman Chris Van Zeyl is out with an injury to his thumb, and perennial All-Star Canadian D-tackle Ted Laurent’s knee will keep him from suiting up for the Grey Cup rematch.

Outside of reigning CFL MOP Brandon Banks, the Ti-Cats next two best receivers will start the season on then 6-Game Injured List, as Bralon Addison has a knee injury, and 2017 Grey Cup MVP DeVier Posey (calf) will have his 2021 debut delayed as well.

Be sure to hit up YouTube.com/BonfireSports on Thursday before (or even during) the game as Chris Walby joins yours truly for GameDay Winnipeg. We have a lot in store for our debut pregame show, including a 1-on-1 sit-down with two-time CFL Most Outstanding Defensive Player Adam Bighill. 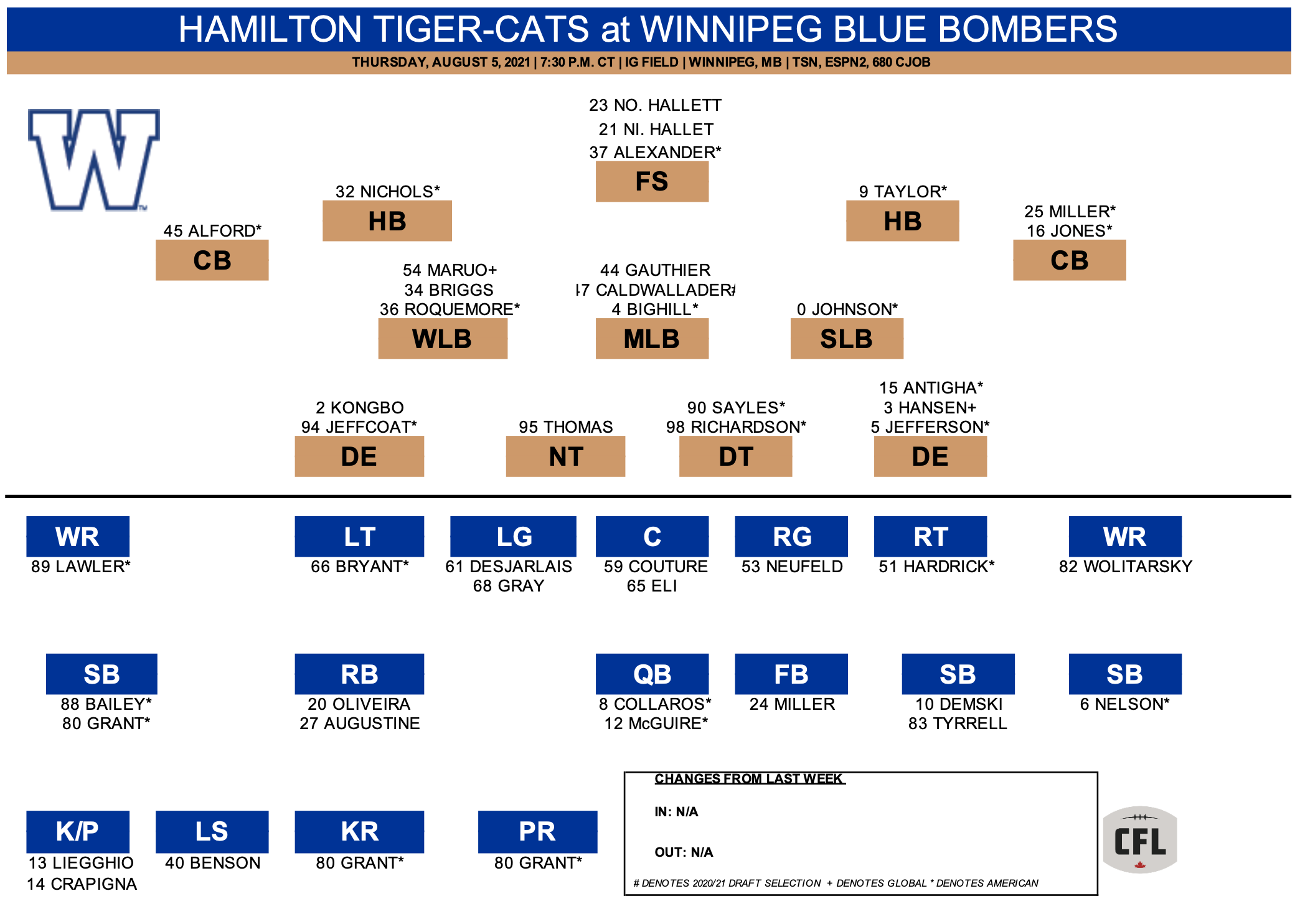 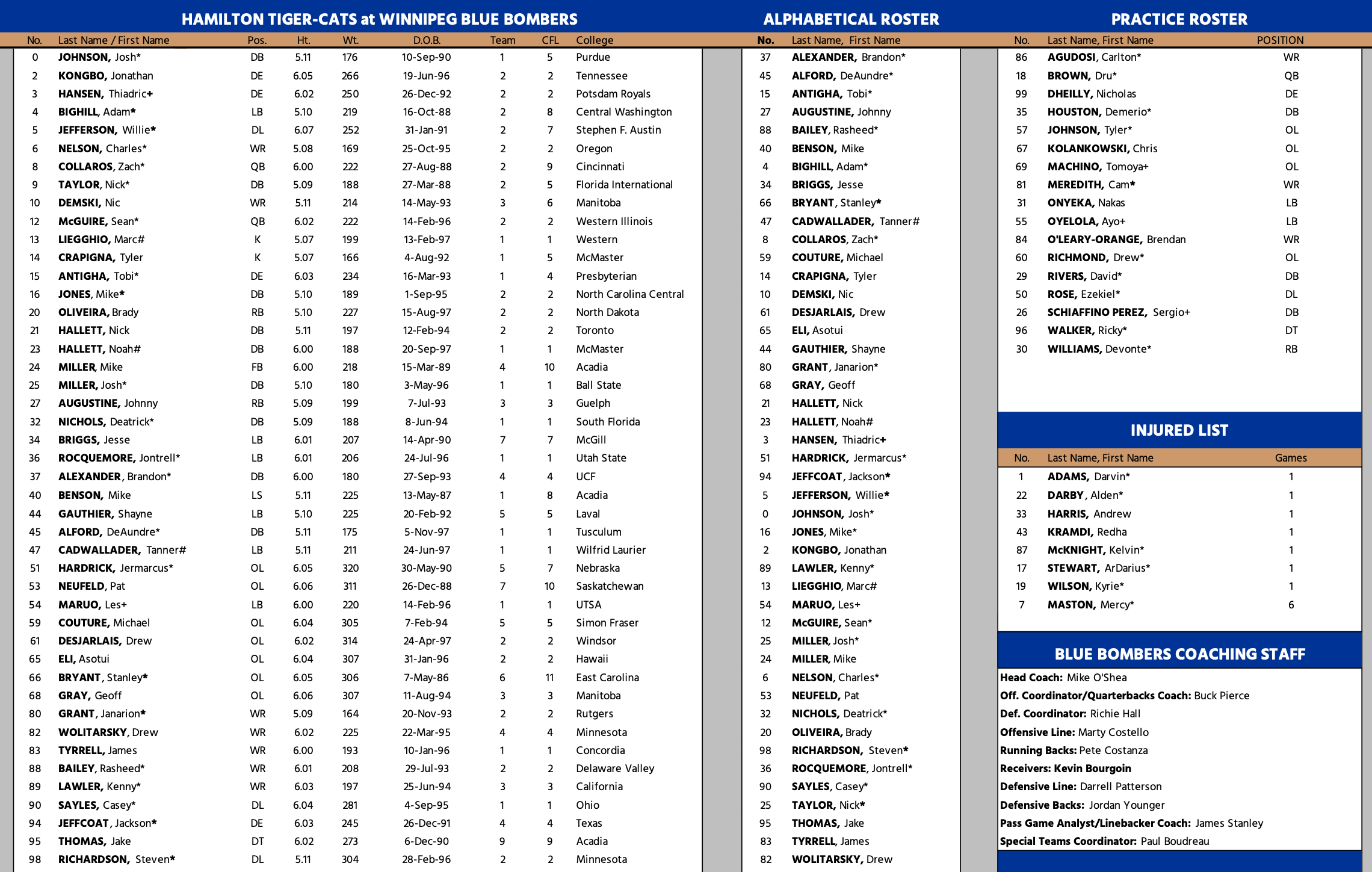 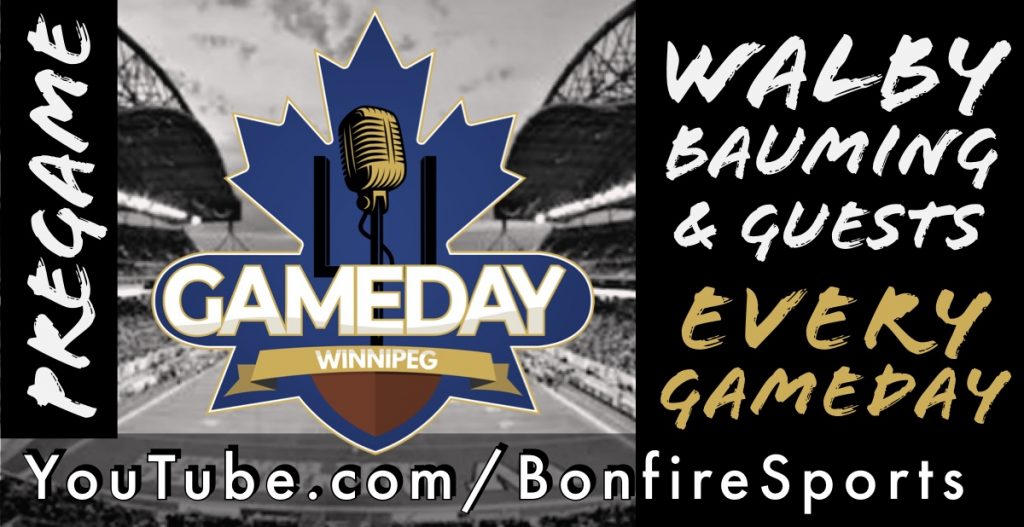 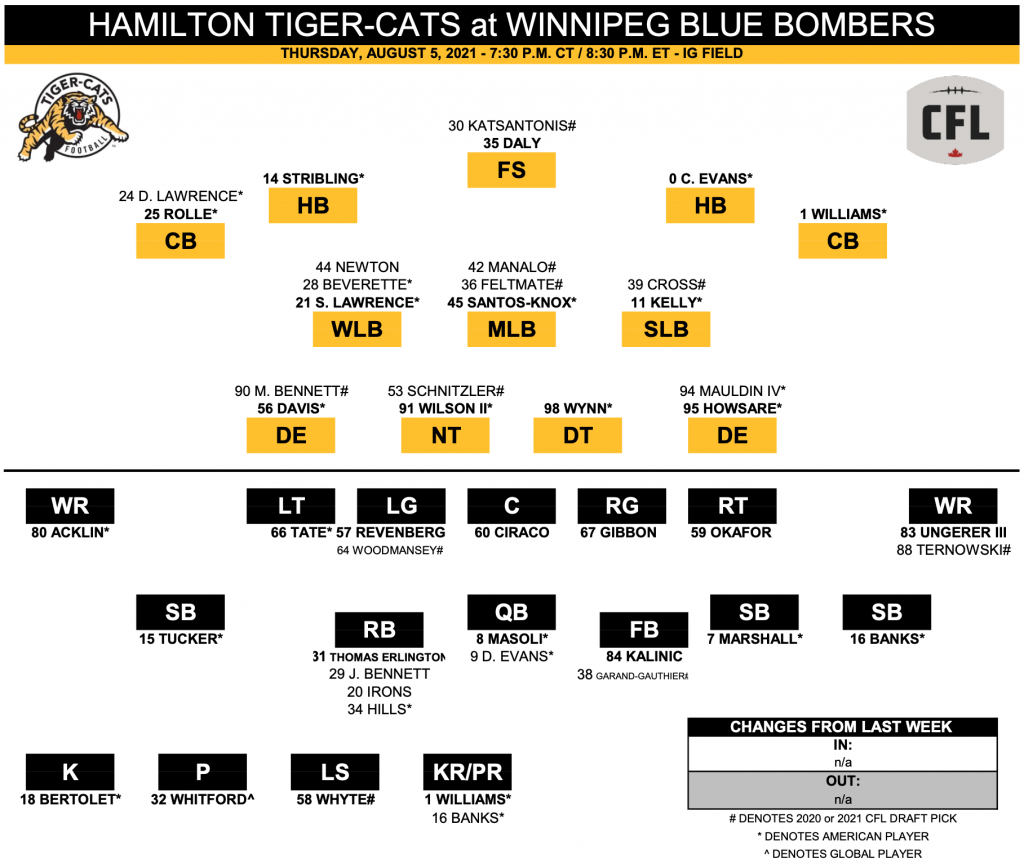 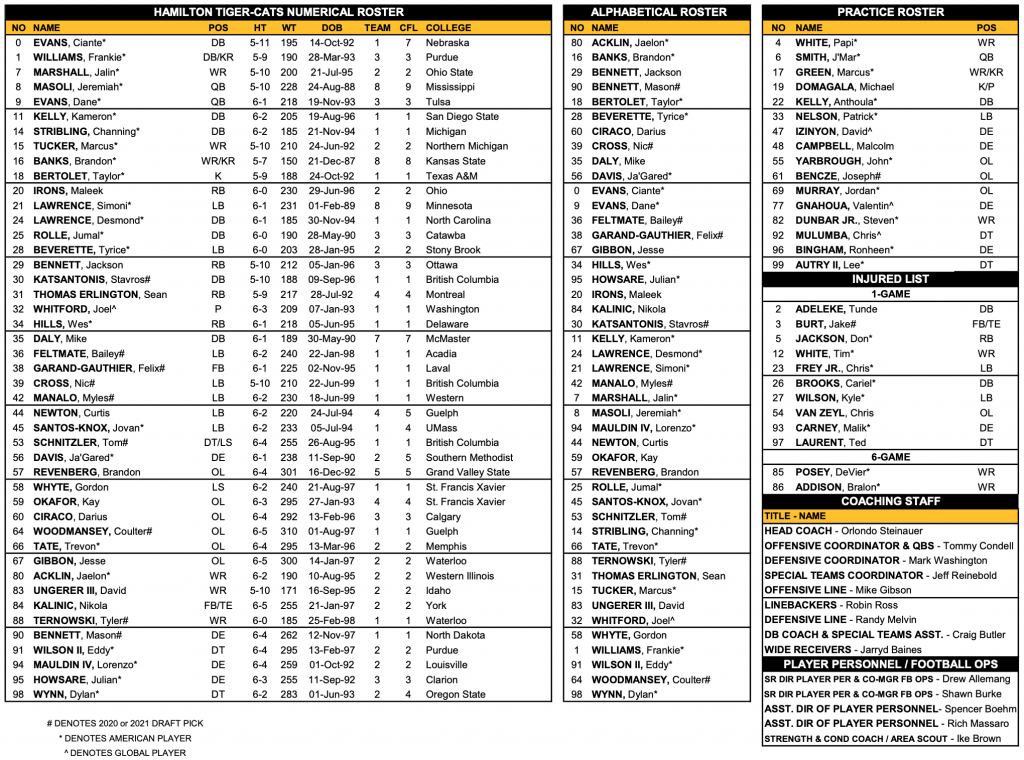